Ay-up to the E-UP! New Volkswagen Has a Yokshire Accent [electric car] 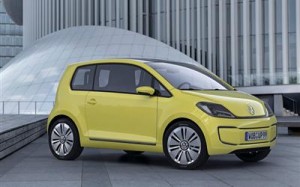 Eeeeeeeee. I thought it was saying hello using Yorkshire dialect.

Apparently the German concept vehicle has stepped up its game and appeared at the Frankfurt Motor Show where VW also announced its launch date.

That date will be sometime in 2013 when Volkswagen hopes that the vehicle will become “the Beetle of the 21st century.”

Now – that’s a tricky target although after the new Beetle it’ll probably a bit easier now. I mean, an engine in the front???? I still don’t dig that in a ‘Beetle’. It’s a pregnant Golf!!

The E-Up! does have quite a bit going for it mind – it has a new “lightweight,” five hundred pound lithium-ion battery pack, a promised range of 130 kilometers, a full recharge in less than five hours, and it even has some solar panels on the roof and the sun visors to add a bit of extra power to the car’s electrical system.