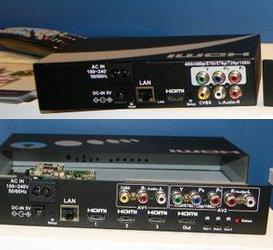 I like the sound of this but have to admit to being slightly confused by the concept.

Their dream is that all you’ll have to do is plug in your new flat-screen tele and the video will magically appear on the screen.

That’s a thing of beauty right there I’m sure you’ll agree.

At the moment the Averlogic system isn’t quite that advanced but it still can sling 1080p24 video with 5.1 audio over standard power lines.

Both ends of the transmission requires a box of tech but someone later down the line will make this vanish I’m sure.

The Averlogic magic is able to whizz the goods out to three receivers, which then output the signal either by HDMI, component, or composite.

The transmitter has three HDMI inputs and one set of component and composite each.

The future is gonna be so sweeeeeeeeeeeet!  🙂