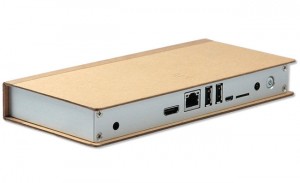 APC have unveiled their new creation – the APC Paper Mini PC, which has combined a Rock APC board inside a book-style cover.

VIA is taking pre-orders for the APC Rock and APC Paper now, and plans to ship the first devices in March, 2013.

To better compete with the Raspberry Pi, the APC Rock has been given some general-purpose input/output capabilities including Serial Peripheral Interconnect (SPI) and Inter-Integrated Circuit (I2C) support, along with a 20-pin JTAG header for debugging.

Better still, there’s 4GB of onboard NAND storage and comes with an optimised version of Android 4.0 Ice Cream Sandwich but VIA offers source code for the bootloader and kernel as well as other documentation which could help developers port other software to run on the mini-computers.

APC Paper explains on their website : “APC Paper, with its unique recycled cardboard case, is a computer for people wanting to connect to the Internet without the need for specific Windows applications. With special attention to design, APC paper blends seamlessly into any home or office environment.”

The APC Paper mini PC is equipped with an APC Rock board which is fitted with a VIA ARM Cortex-A9 @800Mhz Processor, and supported by 512MB of RAM and will support resolutions up to 1080p.

Both new models are expected to launch in March, with VIA taking pre-orders for Rock at $79 and Paper at $99 – both considerably more than the original APC machine. UK pricing and availability have yet to be confirmed.