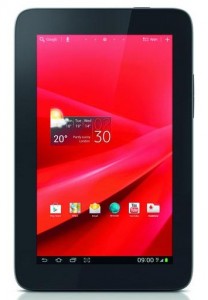 Vodafone has just launched its own Android tablet. Built by Lenoco and called the Vodafone Smart Tab II it runs Android Ice Cream Sandwich and can be yours from £29 on a 24-month £20 p/m contract.

The Smart Tab II isn’t going to worry the Nexus 7 or Kindle Fire HD but it does sport a 1024 x 600 7-inch screen matched to a 1GHz processor.

You also get 1GB of free Wi-Fi access – probably through BT OpenZone as that’s who’s usually attached to Vodafone plans.

Other specifications include a 2-megapixel camera on the rear, 0.3-megapixel on the front, 4GB of on-board storage, with a microSD card slot capable of expanding that by a further 32GB, and a 3550 mAh battery.

I’m hoping to get my hands on one for a review soon.