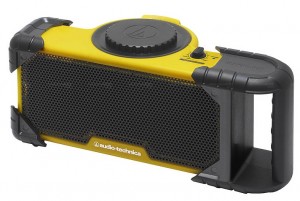 Looking for something more rugged than the Jawbone Jambox and more portable than the Roots Rock from The House of Marley? Check out Audio Tehnica’s replacement for the ATSPB5 – the similarly snappy titled: AT-SPB30!

True, the Jambox is very special but so is the £160 price tag it comes with.

Audio Technica is hoping that the AT-SPB30 Boogie Box speaker has what it takes to become your picnic/beach party/festival essential for packable group listening.

The new Boogie Box is more compact than the 2009 version but still looks like it is built to be lugged around and survive more parties than some of your friends – it will even still be going when everyone has passed out as it manages to squeeze out 40 hours of playback on four AA batteries!

The important bit is that the Boogie Box kicks out the tunes via its 2.1 channel speaker setup (2Wx2CH+3.6W) and 47kÎ© impedance – basically this should deliver clear and decently loud waves to your lugholes. All of that is wrapped up in a package which weighs just 630g.

Priced at a very reasonable Â£54 (7000 Yen), you’re already saving 100 quid if you buy the AT-SPB30 Boogie Box instead of the Jawbone JamBox.

Perhaps it’s not as slinky as the JamBox but that extra padding on the Boogie Box will certainly help it last longer and it would probably be more likely to withstand some staggering clumsy footwork than the Jawbone.

launches next month in Japan. No word on a UK release just yet.

Lanmodo Pro – the 4 season tent for you and your car