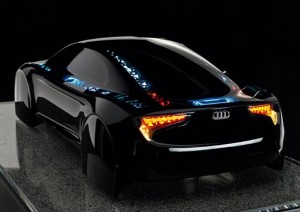 Customising your ride hasn’t moved on that much since I started driving back in 89. Most teenagers will end-up driving a car that looks like it has ram-raided a branch of Halfords. Of course, if you have the money then you could have something as gorgeous as this Audi.

If you still think that underlighting your Corsa is pretty damned swish then you’d better hang-on to your chromed pipes.

Audi’s ‘Visions’ project brings the OLEDs we know and love to the outside of the German auto.

Looking like a pimp from Tron you are, in fact, getting a glimpse as to how external lighting on cars might look in the near future.

Stephan Berlitz, Head of Lighting Electronics for Audi, states “These are individual points of light that need additional optical devices – reflectors, optical conductors or scatter optics. OLED surfaces are themselves the source of light, and the thin plates also look attractive. They weigh little, light up extremely fast, develop only a small amount of heat, last for several tens of thousand hours and don’t consume any more energy than conventional light-emitting diodes.”

Check out the video below to see the creation in its full glory. Don’t think that your Focus will get similar treatment through the use of a few carefully placed LEDs though. Berlitz noted that the homogenous visual effects you’re about to see in the video would not have been possible with simple LEDs.

Oh well, back to adding a noisy exhaust and fat rims then…