Audi Shark – A Sporty Hovercraft That Should Be Made! 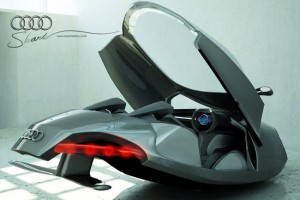 Wired have uncovered a form of transport that mixes the reliability brought by that German attention to detail we expect from Auto Union Deutschland Ingolstadt mixed with an Imperial speeder bike!

The Audi Shark concept has been penned by 26-year-old Kazim Doku and was the winning entry into a design competition (.pdf) co-sponsored by Audi and Milan’s Domus Academy.

Don’t let the Audi badge fool you – notice that lack of wheels?

That’s because it’s actually a hovercraft but a totally desirable one.

Doku says the driving position is similar to a motorcycle “but with a car’s security.”

The Turkish lad from Izmir has already won three other prizes for automotive design!Â  How good is that!!!??!! 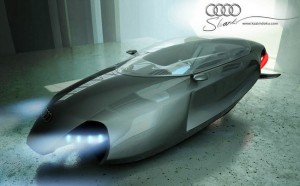 His previous prize-winning concepts include the fabric-skinned Peugeot Ustuminki, which was a finalist in the 2007 Peugeot Design Competition, and first prize in Turkey’s Ototrend contest for a no-doored concept called KA-Design.

Although first prize in the Audi design competition was a 70 percent scholarship to the Domus Academy, Doku says he can’t afford the balance and has withdrawn his application for the Master’s in Automotive Design program.

This guy totally deserves a job.

More lovely pics and a video to found at Wired