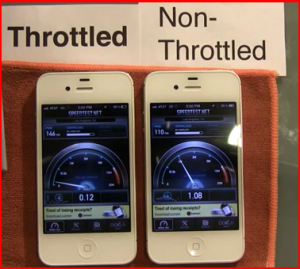 This latest case could well open the flood-gates for similar cases as Pro-tem Judge Russell Nadel found in favor of Spaccarelli in Ventura Superior Court in Simi Valley on Friday, saying it wasn’t fair for the company to purposely slow down his iPhone, when it had sold him an “unlimited data” plan.

AT&T has around 17 million customers with “unlimited data” plans who could also be subject to throttling. That’s nearly half of its smartphone users.

AT&T forbids them from consolidating their claims into a class action or taking them to a jury trial so the only way for claims to be made is through small claims actions and arbitration.

Since last year, AT&T started slowing down data service for the top 5% of its smartphone subscribers with “unlimited” plans. Even though AT&T warned users that it would start doing this it was a great shock to subscribers as to how little data use it takes for throttling to kick in — often less than AT&T provides to those on limited or “tiered” plans.

Spaccarelli said his phone is being throttled after he’s used 1.5 gigabytes to 2 gigabytes of data within a new billing cycle. Meanwhile, AT&T provides 3 gigabytes of data to subscribers on a tiered plan that costs the same — $30 per month.

When slowed down, the phone can still be used for calls and text messaging, but Web browsing is painfully slow, and video streaming doesn’t work at all.

AT&T spokesman Marty Richter said the company will appeal the judge’s ruling: “At the end of the day, our contract governs our relationship with our customers,” he said.

AT&T area sales manager Peter Hartlove, who represented the company before Nadel, declined to comment on the ruling. He argued in court that his employer has the right to modify or cancel customers’ contracts if their data usage adversely affects the network.

Nadel looked at the remaining 10 months in Spaccarelli’s two-year contract with AT&T and estimated that he might pay $85 a month on average for using additional data. AT&T charges $10 for every extra gigabyte over 3 gigabytes.

Nadel said it’s not fair for AT&T to make a promise to Spaccarelli when he buys the phone while burying terms in his contract that give the company the right to cut down data speeds.

Spaccarelli, 39, researched his case for a few months, and then spent three days putting together a binder of documents to bring to court.

“I need the money, but for me, this case is not about money at all,” Spaccarelli. “You don’t tell somebody ‘you have unlimited’ and then cut them off.”

AT&T’s throttling of “unlimited” data comes as it tries to deal with limited capacity on its wireless network. When the iPhone was new, AT&T had ample capacity on its network, and wanted to lure customers with the peace of mind offered by unlimited plans. Now, a majority of AT&T subscribers on contract-based plans have smartphones, and the proportion is growing every month. That’s putting a big load on AT&T’s network.

Verizon Wireless and T-Mobile USA also throttle users, but their policies are gentler. Verizon only throttles if the specific cell tower a “heavy user” subscriber’s phone is communicating with is congested at that moment. T-Mobile’s throttling levels are higher for the same price, and the levels are spelled out ahead of time. AT&T subscribers have no way of knowing if they’ll be throttled before a warning message drops in. If they keep using their phones, throttling kicks in a few days later.

Do you agree with throttling in times of heavy use or do you think that unlimited data should always be squirted to your device at the regular speed, no matter what?