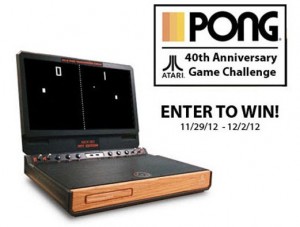 If you know your gaming history, you will hold Atari and Pong as names to be revered. Atari is celebrating the 40th birthday of Pong by putting a modded Xbox 36 up for grabs.

Atari has got an LCD screen-equipped Xbox 360 customised to look like the original Atari 2600 games console – and it could be oozing its retro cool in your home.

The original Atari 2600 game console was released back in October 1977 by Atari and used microprocessor-based hardware and ROM cartridges – which meant instant gaming and was a real taste of the future!

Atari has also launched a new Pong game for iOS which is now available to download for free from the Apple iTunes App Store. “Pong World introduces a new generation to the classic game of PONG with a dazzling unique twist and colorful new look,”

To enter into the draw for the custom Pong Xbox 360 console, bounce over to the Atari Facebook page to signup.

“We were impressed with the creativity and original vision of indie developers in the PONG contest, and the grand prize winner receives full honors as the marquee release for the title’s 40 year anniversary,” said Giancarlo Mori, EVP Product Development, Atari. “Pong World is an excellent tribute to one of our company’s legacy titles, giving players a fresh new look and the classic gameplay they know and love.”

Have you played Pong? What is the first game you ever played? For me it was Space Invaders at a holiday arcade, closely followed by Asteroids.

Perhaps this is all too old skool for you and you’re more looking forward to the Xbox 720 being released.