Asus Touchscreen Keyboard Puter In Action – Out This Month 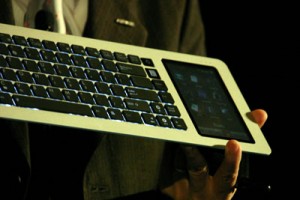 Those folks over at Engadget Chinese have treated the interweb with their footage of that Eee Keyboard in action.

Looking at the flick it seems that the touchscreen-endowed keyboard looks like it has some game.

The secret behind its swagger?

The keyboard houses an entire Atom chipset inside its skinny body which is separate from the touchpanel.

The touchpanel, however, still uses XP to run Skype and MSN and serve as a media remote, among other things.

Engadget Chinese said it worked pretty well, and it appears that the 5-inch, 800×480 screen uses a capacitive panel.

The keyboard is rumored to launch sometime in June, in either wired or wireless-UWB models.

Watch the vid to see this beauty in action 🙂