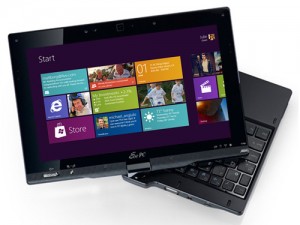 There has been much ado regarding the new breed of ultralight, ultra-portable Ultrabooks and it seems like Asus is planning to launch an ultrabook with a difference.

Word is that Asus has been working closely with Ultrabook bosses, Intel, in order to create an Ultrabook which will pack a twisty-turny swivel screen so it can transform from laptop to tablet – just like their Asus’ Eee PC T101MT in the picture.

The Ultrabook’s processor of choice, Ivy Bridge, will land in May 2012.

The new device will arrive running Windows 8 with plans to launch alongside Microsoft’s new OS in September 2012.

Asus are really trying their hardest to cover all the bases in offering you with a range of portable, convertible devices – so, what would opt for: The new, as yet unnamed swiveling Ultrabook or the tablet-docks-into-laptop quad-core toting Eee Pad Transformer Prime?