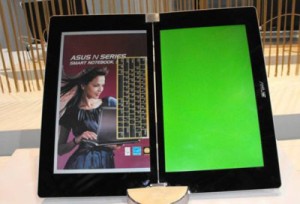 An Asus top dog has let slip some pretty interesting gadgety news in a recent interview – one tasty nibble is that Asus has its own eBook ready to ship!

In an interview with the New York Times, Asus vice chairman, Jonathan Tsang, said that the company had an Asus eBook device, as well as a games machine â€œbetter than the Wiiâ€ waiting in the wings…….tell us more Johnny boy!!

Unfortunately Tsang wouldnâ€™t reveal any more details on the Asus eBook but I like how Electricpig are thinking.

They reckon, and I hope they’re right, it could be that Asus dual panel laptop that was spotted at the CeBIT tradeshow earlier this year?

Having twin-screens would certainly help it stand-out in what’s becoming a competitive market.

We already have The Kindle with its 3G, Fujitsu are concentrating on colour e-Ink displays and Sony uses its international brand to sell theirs.

With a dual-screened device you could more realistically flick through pages with loveliness such as multitouch.

Would you be tempted by a dual-screen eBook reader from Asus?