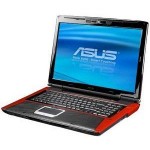 Asus have created the G71 which is claimed to be the world’s first Intel Quad Core gaming notebook – armed as it is withÂ the new Intel Core 2 Extreme processor QX9300.

As well as the processor, this machine has an added boost thanks to the removal of the overspeed protection so gets more processing power and better abilities to multitask.

“The G71 delivers a total gaming experience in a highly portable package, with an emphasis on audio clarity and stunning graphics performance”, says Asus.

You also get a 17-inch Crystal Shine display with a quick response time of 8ms, powered by the Nvidia GeForce 9700M GT GDDR3 512MB graphics card.

On the keyboard, there are the expected gaming hotkeys and the chassis of the G71 also features a funky programmable lighting system.

Phonics comes out via the Altec Lansing speakers and there’s also Dolby Home Theater, and a 2.0-megapixel webcam.

The G71 should be making an appearance during the first week of November for around $2,999.