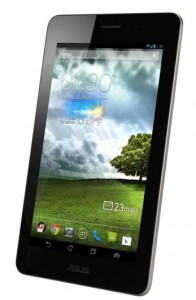 Have you been waiting to get a mobile phone that has a 7-inch screen? Well, you’re in luck as you’ll soon be able to put your money down on the Asus Fonepad – the phone call-making tablet.

The 7-inch Android tablet will soon be available for pre-orders in the UK.

The Asus Fonepad is powered by Intel’s Atom Z2420 processor, supported by 1GB of RAM. Its 7-inch display is packing a 1280 x 800 pixel resolution.

As well as being able to use it as a rather large ‘mobile’ phone, the Fonepad features s 1.2 megapixel front facing camera for video calling, buddied with a 3 megapixel rear facing lens for video and photographs. The battery is said to last 10 hours of continuous use and there’s 16GB of space to store all your apps, pics, vids and such like.

Customers will be able to pre-order the 7-inch Asus Fonepad starting on April 12th for £179.99 from UK retailers Carphone Warehouse, Sainsburys and Amazon, with an expected shipping date of April 26th.

Will you be buying an Asus Fonepad or will you be checking out the Wi-Fi only Google Nexus 7 (also cobbled by Asus) which is priced either side of the Fonepad at £159 for 16GB and £199 for 32GB.