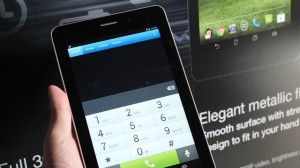 Anyone else thinking that phones are getting too big? How about a phone with a 7-inch screen? Meet Asus’s Fonepad.

Where the Padfone seems a good idea, I’m not entirely convinced that a phone which is the same size as a tablet is.

Perhaps HTC is right to release the HTC Mini phone for your… phone?

The Fonepad phablet is basically a 7-inch tablet that makes calls.

The 7-incher runs on Jelly Bean and has a 1280 x 800 pixel display, and is the same size and same resolution as Google’s Nexus 7 tablet.

Unlike every other new smartphone, it doesn’t have a back facing camera. I put that down to Asus understanding that taking pictures with a tablet makes you look silly – but holding one to your ear is obviously ok..?

There is a 1.2-megapixel lens on the front for video calling, just in case you were wondering.

I’m guessing that the intention is to use the Fonepad with a bluetooth headset and then you’re not having to cart around a tablet and a smartphone… still… there will be someone using it as a regular phone, no doubt.

The Fonepad runs on a Qualcomm Snapdragon chipset, and has 64GB of storage and costs £179 if you fancy a phablet.