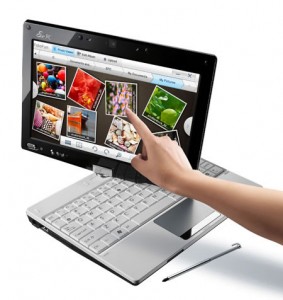 Asus added the Eee PC T91 to its EeePC line-up as predicted.

If you can recall this is the first Eee model to sport an 8.9″ swivelable touchscreen and a suite of touch-optimised software that enables users to get the most out of finger or stylus input.

We first saw the Asus Eee PC T91 at CES 2009 even though it slipped beneath my radar to start with.

The Asus Eee PC T91’s unique software apps, collectively known as TouchSuite, allow users to get tactile with their tasks such as: literally touching up photos, creating photo albums, leaving handwritten desktop memos for the next to use the puter, and sketching cartoons or custom emoticons.

As well as being a pretty handy addition to the EeePC range it works as a tablet so that users can read documents, scribble ideas into digital notebooks and surf the Internet on the move without having to open up the lappy.

The T91 is also packing a TV tuner and Global Positioning System (GPS) for extensive entertainment options and advanced navigation capabilities on the go.