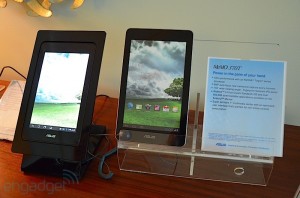 Asus announced its plans to take on Amazon’s Kindle Fire with a quad-core Android tablet at CES 2012.

At yesterday’s NVIDIA press conference at CES, Asus took the stage to talk about using NVIDIA’s quad-core Tegra 3 mobile processors in its latest fleet of tablets.

Shen, a chap that has been credited with creating the netbook and transformable tablet forms as well as the modern motherboard market revealed a sample of the Asus EeePad Memo.

Not only that – the Asus EeePad Memo will be released at a “magical” price. That magical price is a pocket-friendly $249 (€194).

Expect to see the Asus EeePad Memo in the stores before June this year.