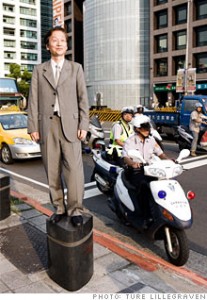 I’ve know that Asus were working on a Tablet PC as well as the dual-screened EeeReader for a while but now the Taiwanese firm has let slip that there’s not one EeePad/EeeTablet on its way – there’s at least a pair coming!

Top Asus bloke, Jonney Shih, confirmed to Forbes in an interview this week that they have plans for â€œat least twoâ€ tablets to be outed this year. So that everything is fair one of the Asus tablets will run Googleâ€™s Chrome OS or Android, while the other is more-than-likely to run Windows. â€œ

Jonney had a slight go at the iPad’s OS when he stated that “Asus always tries to address the open camps of Google and Microsoftâ€ – Apple? Closed? 😉

Asus wants to make a mark everywhere in your home as Shih announced that “Weâ€™re interested in making anything that can improve your life experience,â€ – so that UV light-equipped EeeCleaner may be making an appearance soon 😉

Typically, even the loose-lipped Jonney Shih didn’t give away a launch date – but I’d expect an EeePad show-and-tell in June at the Computex tradeshow.