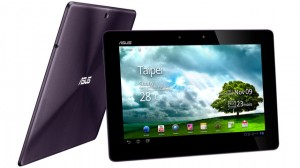 Ok, so Eee Pad Transformer Prime may not be the snappiest name out there but it could well be the swiftest tablet-cum-laptop available very soon. The Transformer Prime is all set to be loaded with Nvidia’s new quad-core Tegra 3 system-on-a-chip (the same item name-checked in the leaked HTC Edge mobile phone). This will push along with a processor which could tick-over at 1.5GHz and be capable of running background tasks, a music player for instance, without so much as tickling the battery.

This next bit I had to read a couple of times – Tegra 3 also boasts a crazy 12-core GeForce GPU! When this baby drops I can predict lots of embarrassed tablets peeping from behind their curtains.

The original Asus Eee Pad Transformer was one of the most popular Android tablets of the year and scooped acclaims from the likes as the Stuff Gadget Awards – but the Prime moves things on by more than a Darwinian step.

The Transformer Prime looks better than its forebear.

Gone is the rudimentary plastic back in favour of some neat swirly patterned aluminium for a start. It has also been working out and now the Transformer has these impressive vital statistics: It’s a mere 8.3mm thin and tips the scales at 586g – that’s both thinner and lighter than the iPad 2! Not to mention that the screen on the Prime is a whole 0.4-inches larger than the iPads 😉

Whilst I’m on the subject of screens – the Transformer Prime’s display is a Super IPS+ (1280×800) job which is protected by Gorilla Glass. The display promises to be bright too, rated as it is at 600 nits. Yeah, me neither. Just take it that most other tablets are 400 at best.

As this is a Transformer Eee Pad there will be the optional keyboard dock available. The new one is also thinner than the original as well as being cased in aluminium with that swirly patterning.

The tablet is also packing an f/2.4 8MP camera with 1080p video skills partnered by an LED flash with a 1.2 MP webcam up front. Not sure how many people will be taking snaps or video using a tablet but the Transformer Prime should be more than capable should the urge take you.

It’s got a micro HDMI port but, when docked, you’ll also get the addition of a real-sized USB port and SD card slot too 🙂

The Prime is listed as running on Android 3.2 but… you and I know that Android 4.0 Ice Cream Sandwich is right around the corner, perhaps even before the Prime hits its launch date.

The Eee Pad Transformer Prime will come in two flavours, Amethyst Gray and Champagne Gold, and with two sizes of storage: 32GB and 64GB – although we in the UK will only see the former.

Asus has already stated that this will be Prime by name and Prime by nature and thus shall be marketed as a “Premium” device with the original Transformer continuing as their “Mainstream” device.

So – here we have a tablet packing the skills and potential to match the current gaming consoles as well as outsmart the iPad. This should make it a very interesting new year for developers and punters indeed 🙂