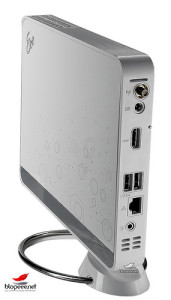 The Asus Eee Box 206 has landed in the UK and is out now!

Inside this latest incarnation of the small deskop, the Eee Box 206, you will find an Intel Atom processor, 160GB of hard disk, 1GB of RAM and Windows XP – Vista, it seems so, would’ve just slowed this machine down too much.

They’re ok specs but the whole ‘Purple Cow‘ aspect of this mac mini type PC is that the Eee Box 206 sports a HDMI port and has Eee Cinema software installed.

It also comes with a remote control, so you can use it as a media centre in the living room coz it’s all ready to be hooked up to your hi-def goggle box 🙂

Not only that, but because the Eee Box 206 is so tiny, itâ€™s a powersaver too.

Asus reckons itâ€™ll save owners who leave their computers on around the clock Â£105 a year – does anyone actually do that? Tis rather naughty!

This Eee Box 206 costs Â£309 which is a third less than a Mac Mini so for a media server type mini PC the HD packing Eee Box 206 seems quite a sweet deal.