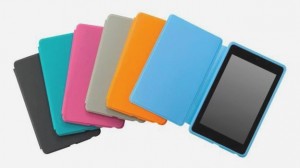 If you’re wanting to protect your new Android 4.1 Jelly Bean tablet then who better than the builder, Asus, to cover your Google Nexus 7?

Following last week’s Google Nexus 7 tablet unveiling, the company behind the manufacturing of the Android 4.1 7-inch tablet, Asus, has revealed a selection of new Nexus 7 covers.

Asus announced the new Nexus 7 cases and covers via its official Twitter feed by simply stating: “And we’ve got things covered. #Nexus7”

They then posted a teaser image of the selection of five varyingly hued wraparound covers.

The Google Nexus 7 UK release should be happening this month, “>albeit with culled content, and Asus was not able to offer any release or pricing details for the tablet’s new covers.

What is known is that they will come in light grey, magenta, cyan, orange and black.

Until this announcement the only official cover was available from Google in an uninspiring grey.