Asus Airo Origami To Be Released As Fold/Unfold Laptop 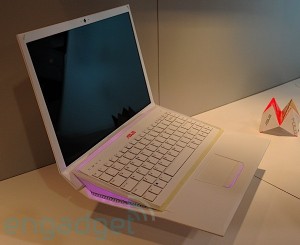 Dontcha just love it when something appears to be a concept but then has more than a 90% chance of becoming a reality.

Asus is continuing its assault on the tech press with that Airo Origami laptop coolness that we saw at CES.

Asus have confirmed that the Airo will be coming to the retail market – now named the Fold/Unfold laptop.

If you remember, this slice of gorgeousness is inspired by the ancient art of paper folding and ergonomically-enhanced, with the keyboard sliding up to an angle that’s going to put less strain no your hands.

When folded away it becomes as flat as a flat thing that’s been run over by a steam-roller.

According to Asus chief Jerry Shen, we’re likely to see the Fold/Unfold later this year – as soon as late summer.

Asus are also working on a real dual-screen laptop but the one that’s being flashed around the interweb is nothing more than a tease.