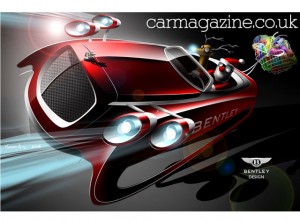 Everyone, even gadgety boys and girls, would describe Santa’s mode of transport as being wood-based and reindeer-powered.

Even though he has to travel at 1,000 km per second to get to each and every home of every good boy and girl on this planet.

You’d think that someone that can get all those gifts to all those people could afford to splash-out a little and get a leading car designer to create his next generation Cringle-mobile.

Well, those at Car Magazine are running a week-long competition doing just that.

Kicking off with a Jag and going through many a marque.

I’ve selected my personal favourites but feel free to click the link and head over to see them all.

Land Rover‘s design includes height adjustable suspension and a particle accelerator. They say that the:

The team of creatives at Aston Martin Design sketched out theirs including some of the Aston design cues in particular the Vantage-effect rear end and they’ve rummaged around in the world’s most expensive parts bin to recycle the gorgeous One-77 rear light clusters. Check out the alloy front wing that’s designed to cut through the snowy air more efficiently and the slipstream is carefully managed so as not to disrupt Santa’s beard when flying across the chimney tops at 200mph.

Personally I reckon that Ol’ St. Nick would be more inclined to opt for some more luxurious surroundings – the kind offered by Bentley. Plush trim, large gift/luggage area, effortless travel with that classic nod to the brands heritage. Nicely done.

The final one was actually the first submitted to the site and was designed by 25-year-old Jaguar exterior designer Thomas Smith. He graduated from the Royal College of Art in June 2009 and joined Jaguar this summer, after a placement in Coventry’s advanced design studio where he penned a luxury flagship coupÃ© blue-sky project.

His version of Santa’s sleigh reveals a push-me-pull-you, very modern take on what a Jag could be.

Other designs from Audi, Nissan, Ford, Vauxhall and a classically Reindeer-powered Rolls Royce number all can be found at Car Magazine.