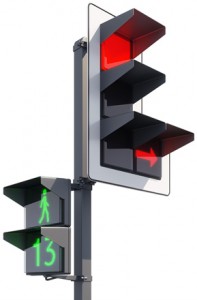 That’s exactly what those fantastic designers over at Art Lebedev Studios have done.

The Luxofor traffic light concept improves upon that world known spherical lamp deal that seems to have been around for ever.

Lebedev’s team asserts that using square lights backed with bright laser diodes would make better use of the available space and provide a more noticeable signal to drowsy motorists.

I’m also digging what looks to be a countdown timer that lets you know how much time you have left to get across the crossing.

The sound of hands hitting foreheads are echoing around the globe as designers ask themselves “why didn’t I think of that?”.