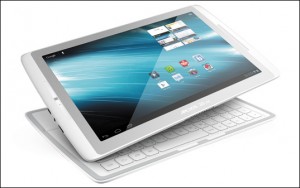 French tech cobbler, Archos, has just launched a new Android Tablet in the form of the Archos 101 XS. The new slate comes complete with a natty cover which transforms in to a portable keyboard.

The Archos 101 XS is looking to take on the likes of the Asus Transformer range of devices thanks to its Android OS and attachable keyboard skills.

Changing over from swiping and tapping to typing is easy-peasey thanks to the bundled Archos Coverboard.

The Coverboard is a nifty tablet protector and keyboard combo that’s connected to the tablet by magnets. Simply flip the cover off and use it as a keyboard dock.

The keyboard has been designed for Android and so has buttons specific to the Google OS such as home, recent apps, notifications – as well as offering volume controls, media playback controls and toggles for Wi-Fi and Bluetooth. It’s considered and well executed.

The Archos 101 XS is powered-by an ARM smart dual-core A9 processor running at 1.5GHz mated with 1GB of RAM and has a 16GB of memory which can be expanded up to 64GB by a microSD card.

The tablet is just 8mm thin, making it one of the slimmest tablets out there, with the actual measurements coming in at 273 x 170 x 8mm and weighing just 600g.

The Archos 101 XS is set to come out mid-September and cost £299 which includes the Coverboard.

It is lighter than the Asus Transformer and when the keyboard is snapped on as a cover, it makes the 101 XS only 13mm thick which is darned impressive.

It is, however, up against some very stiff competition. The Nexus 7 is substantially cheaper than the 101 XS and the iPad 2 is only £30 more expensive.

Which would you buy?