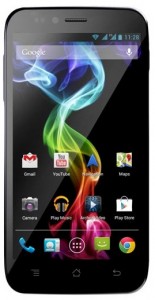 Yesterday Archos announced that it was launching a new range of Android smartphones, and now the company has confirmed that they will be launching in the UK with prices starting at £69.99.

“The smartphone market is shifting, as SIM-free sales versus subsidized sales are increasing, and ARCHOS is prepared to respond, as we can offer retail channels affordable, unlocked and feature-rich smartphones without the need to subsidize,” says Loïc Poirier, CEO of ARCHOS. “Furthermore smartphones and tablets are interrelated markets that have quickly crossed over with the arrival of “phablets” – half-phone, half-tablet devices. It only makes sense that this should be our next phase of products as this would be a natural fit for our brand and long term growth.”

Kicking things off is the 3.5 inch Archos 35 Carbon. This device sports HVGA resolution, 4GB of internal storage, a 1GHz Qualcomm processor, and dual VGA cameras. It’s price tag of £70 makes the spec forgivable and a reasonable emergency/festival phone. It does land with Android 4.0 Ice Cream Sandwich at least.

Next up is the £179 Archos 50 Platinum. This 5-inch device tops out at qHD for resolution, but has a better set of internals with a 1.2GHz quad-core Qualcomm 8225 processor, 1GB of RAM, 4GB of internal storage, and an 8 megapixel 720p HD rear camera with a 2 megapixel front camera. It’ll run the more up-to-date Jelly Bean 4.1.2.

Finally, the 5.3-inch Archos 53 Platinum brings a modest boost for your £199. It’s a tad bigger than the 50 Platinum, though it shares the same specs in almost every other area (battery being the only other component separating the two).

More details can be gathered from the Archos site.