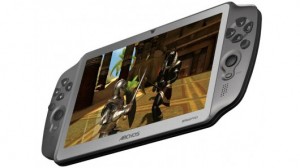 Following the breaking news of their nifty looking 101 XS convertible Android tablet, Archos has announced a product that brings something more different to the increasingly overcrowded Android tablet space. The 7-inch GamePad.

Archos is obviously trying to mix things up in the very popular android tablet marketplace.

They have taken the all too familiar 7-inch form factor and added physical controls for a more traditional – and potentially less frustrating – gaming experience.

Archos has packed the GamePad with a dual-core 1.5 GHz processor running the Ice Cream Sandwich flavour of Android is a tad disappointing.

The dual core chip is married to a Mali 400mp quad-core GPU which should help matters.

Archos has also worked to ensure compatibility with the numerous titles available for the OS through the inclusion of automatic game recognition and mapping software.

This tech works to ensure that the PlayStation Vita-esque controls are compatible with games that usually use on-screen touch-based input. The company is claiming an initial compatibility with more than a thousand titles.

Personally, I think that Archos may be relying too much on the physical controls and funky form factor. Especially if you compare its specs with Google’s Nexus tablet.

I have already championed the Nexus 7 for gaming but let’s look at the juicy bits. The Google tablet is also 7-inches but features a quad-core Tegra 3 processor and a 12-core GPU.

I’m just asking – how many of you ran out to buy the Sony Xperia Play phone just because of its controls?

The GamePad is set to hit shelves towards the end of October, and will retail for less than £130 (US$205 at the time of writing).