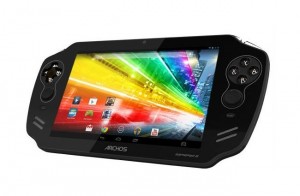 Gamers waiting for more details on the Archos GamePad 2 will be pleased to learn that Archos has just revealed the inner workings of the new handheld games console.

Archos has been working on a new version of their GamePad for a while, and it seems like the next gen portable gamer has a new look as well as uprated innards.

The Archos GamePad 2 has had two buttons removed from the front which have been added to the sides of the gaming tablet, providing shoulder controls. There’s also larger speakers on its face.

Under the hood of the new GamePad is a 1.6 GHz quad-core SoC with four GPU cores supported by 2GB of RAM together with a choice of 8GB or 16GB of internal memory for your games and Android apps.

If you need extra storage, the Archos GamePad 2 is equipped with a SD card slot to add up to 64GB of space when needed.

The specs also reveal support for the Archos mapping tool so that gamers can map any game’s controls to the physical buttons.

The tablet will also come packed with Gameloft’s Asphalt 8: Airborne, Modern Combat 4, and the typical Google assortment of apps like Gmail, Google Play, Google Plus and so on.

So far it’s unknown what version of Android this tablet will use, but HKTDC currently lists the device with a unit price of $169.99 USD.

Unfortunately no information on UK pricing or worldwide availability for the Archos GamePad 2 has been released as yet by Archos, but as soon as information comes to light, I’ll let you know.