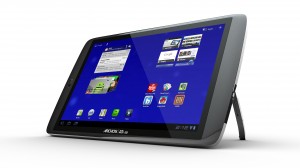 Archos has officially unveiled its third generation Android tablets and, as well as the healthy specs and friendly pricing, the G9 range have the bragging rights of being the â€˜industryâ€™s fastest tabletsâ€™!

The two new G9 Archos tablets come in a variety of internal flavours in the styles of the 8-inch Archos 80 G9 and the 10.1-inch Archos 101 G9 – both models are set to land later this year running version 3.1 of Googleâ€™s tablet loving Android Honeycomb OS.

So, what about the company’s boast that these are the â€œindustryâ€™s fastest tabletsâ€ then? Well, Archos has fitted both the Archos 80 G9 and the Archos 101 G9 with an ARM Cortex 1.5GHz dual-core A9 processor which, according to Archos, allows users to perform tasks up to 50% faster than on the current breed of 1GHz dual-core tablets. Nice 🙂

As well as that speediness these tablets are some of the cheapest Honeycomb devices on the market in their entry-level guise. The 8-inch 80 G9 model starts at Â£199, while the 10-inch 101 G9 pitches up at Â£249 – that’s including VAT by the way.

â€œIt is no secret that the tablet market is dominated by the iPad,â€ announced Archos CEO Henri Crohas at the unveiling of the G9 range. He added: â€œThere are many â€˜iPad killersâ€™ trying to beat the iPad on its own ground, we at Archos started earlier releasing our first Android tablet in 2009. Being the first we have developed out own methods which are cheaper.â€

If you need the 10.1-inch Archos 101 G9 with more memory then you should head for the 250GB HHD version which should retail for Â£399. It will add 2mm to its girth though. Flash memory is usually the way to go for portable devices as HDD could be a little delicate when being bumped around. Fear not – Archos claims to have devised a 4GB memory cache buffer which should reduce the amount of physical work the disk will need to do.

A cool addition is that both the 80 G9 and the 101 G9 have a removable slot on the back which allows for scalable 3G upgrades thanks to a universal 3G USB dongle port. This means that the PAYG dongle you have shoved into laptop can also be slotted into your tablet.

The G9 range of tablets are to hit the UK in September – does the price/performance combo of the G9 tick the right boxes for you?