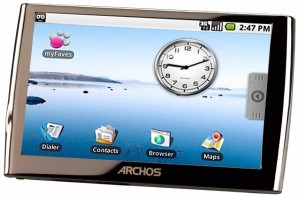 An Android powered Archos Tablet that also rocks as a phone?

Well, not much in the way of details but everyone’s expecting a big reveal at the MWC.

No real pictures yet, but the specs are pretty good – A five inch screen, up to a 500GB hard drive, a battery capable of 7 seven hours of video playback, and Flash support, all in a package just 10mm thick.

Think an Archos 5 after a work-out.

TI have chucked out a press release crowing Archos’s use of the OMAP3 processor in an upcoming “Internet Media Tablet” that runs on Android and also doubles as a phone.

As well as the OS choice being Android Archos is apparently cooking up media features – to the point of there being talk of HD video playback.

It launches in the third quarter, hopefully with a capacitve touchscreen.

Archos, ditch the resistive one please.