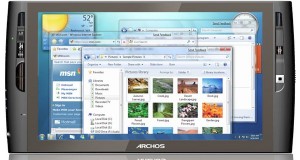 There’s been a few different prices and release dates for the Archos 9 tablet since it was introduced early last month, but it looks like Archos has now come out and finally clarified things a bit for us all in the UK.

I’ve also heard that the Archos 9 will appear in September although, as far as I’m aware, October 22nd is still the launch date for Windows 7….

Anyone shed some light on this?