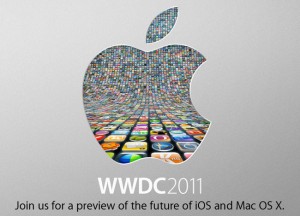 Apple has just officially confirmed the dates for the 2011 World Wide Developer Conference (WWDC), and WWDC 2011.

Apple is expected to unveil a range of iThings at this years WWDC – as well as the highly anticipated iPhone 5 there looks to be some new things happening with Appleâ€™s iOS and Mac OS X.

â€œAt this yearâ€™s conference we are going to unveil the future of iOS and Mac OS,â€ said Philip Schiller, Appleâ€™s senior vice president of Worldwide Product Marketing. â€œIf you are an iOS or Mac OS X software developer, this is the event that you do not want to miss.â€

Apple have got in to a pattern now and so should unveil their latest smartphone. As for iOS – word is that a new version, iOS 5, is not expected to land til Autumn this year. So is the tweak to make way for MobileMe and the Cloud music service?

Either way, I’d expect Apple to at least flash iOS 5 around a bit 🙂