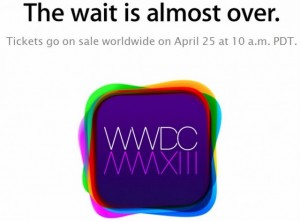 Apple’s Worldwide Developers Conference will take place this year between June 10th-14th at San Francisco’s Moscone West, the company has just announced and tickets on sale on Thursday.

Apple has decided to pre-announce the conference and will start selling tickets on Thursday at 10 AM PDT.

This change is most likely in response to developers based in Europe and the West Coast who were frustrated last year when tickets were announced and put on sale at 5:30 PDT and sold out in less than two hours.

As with previous years, the conference will focus on iOS and OSX, Apple’s two major platforms.

At this year’s WWDC, there will be more than 1,000 Apple engineers on hand presenting over 100 technical sessions for developers.

“We look forward to gathering at WWDC 2013 with the incredible community of iOS and OS X developers,” Philip Schiller, Apple’s senior vice president of Worldwide Marketing, said in a statement. “We can’t wait to get new versions of iOS and OS X into their hands at WWDC.”

Apple hasn’t held a major product event in more than six months, since it unveiled the iPad Mini and new Macs in late October.

During Apple’s earnings call on Tuesday, CEO Tim Cook hinted that Apple would not release any new products until the autumn, suggesting that whatever comes out of WWDC will be strictly software focused.

That said, Apple has made significant hardware announcements at previous WWDC events, including unveiling its first laptop with Retina Display at last year’s event.

What do you hope to see from the WWDC?