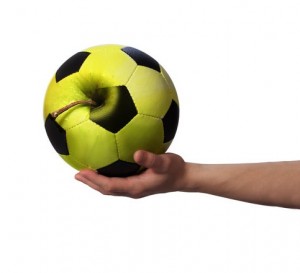 Hey there sports fans! More fuel to the Apple iTV rumours – this time regarding the people’s sport, football. In particular the Premier League.

Apparently Apple is looking to buy the UK TV rights to the football Premier League. This news has landed in my inbox via an article in today’s Daily Mail. Yup, that bastion of all things Apple 😉

Word is that Apple is getting ready to enter a bidding war with current holders, Sky, when the rights go back out to tender later this year. Sky forked out £1.6 billion for its current rights.

The report suggests that this plan is to help boost sales of the iPad tablet but, if this actually pans out, I would’ve thought the fruity tech giant had larger plans.

There’s rumours aplenty that point to Apple are busy building their own-branded HD telly, currently named iTV, so it would make sense to include some top-level sports coverage in with its televisual delights. The thing is, would Apple actually be willing to write a cheque for around £2billion just to get soccer on its screens?

If it was going to get some footy deals to attract supporters perhaps aiming for the £42 million-per-year FA Cup rights that ITV hold when the deal ends in a coupla years would be more reasonable or maybe a partnership with Sky and/or ITV?

Perhaps more will be revealed at Apple’s New York event?