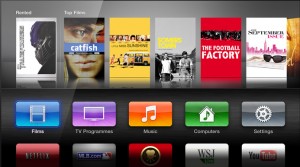 Details of what Apple has in store for the new Apple TV have gotten out and it sounds like tweaks to services and it’s interface are on the cards. Could it also be paving the way for the much talked-about Apple iHDTV?

The next version of Apple TV will feature live streaming, an iPad-style interface, and social media, according to the Wall Street Journal.

This follows on from word that Apple is currently in talks with cable providers to offer a more unique television service.

The distinction between live and on demand TV will be erased as all shows are stored. There will also be more social integration with access to Twitter, Facebook and the like while watching TV.

The thing is, will this be as useful seeing as people will be probably watching shows at different times?

“Apple’s vision for a new device that can be used as a set-top box includes features designed to simplify accessing and viewing programming and erase the distinction between live and on-demand content, people briefed on Apple’s plans said.

The Cupertino, California-based company proposes giving viewers the ability to start any show at any time through a digital-video recorder that would store TV shows on the Internet. Viewers even could start a show minutes after it has begun.”

The whole package will all enjoyed via a clear and, no doubt gorgeous, iPad-style interface with icons for services and channels.

I would even venture that all of these tweaks are being tested ahead of the company’s Apple iTV – that 50-inch super hi-res gogglebox that the Cupertino tech cobbler has been sweating over.

If you can’t wait for that then you may like to check out the Apple TV from B&O.