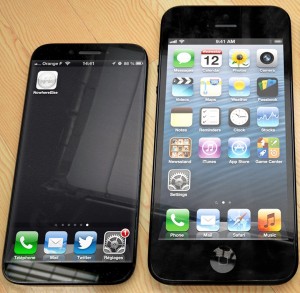 Apple continues to hand over more of its mobile market share to Android but it might be planning a sneak attack targetting phablet fans with a 4.8-inch screened iPhone 6.

According to Cowen and Company analyst Timothy Arcuri, who has looked in to Apple’s supply chain sources, all indications are that there’ll be an iPhone screen size increase (up from the current 4-inch size) coming soon.

If I was you I’d add a generous pinch of salt with that as we all know what happens with most iPhone rumours. Anyone remember the crazy whispers about iPhone Math?

Arcuri also detailed some expected changes to the iOS operating system, stating that iBeacon, Touch ID and Passbook would come together to power a new mobile payment system built into the phone, and even went as far as to suggest a possible June launch for the handset.

Obviously there has been no official word from Apple about the above but what is true is that Android is garnering more support as the go to mobile operating system. With that in mind could Apple actually pull something amazing out of the bag to reignite interest?

What would you want from iPhone 6?