Apple Tablet Price Slips out as does Other Product(s) 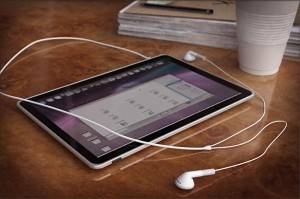 Apple’s â€˜latest creationâ€™ should appear in a few short hours and the loose lips have started.

A German electronics retailer apparently Tweeted the European launch date and pricing for the Apple iSlate.

Media Markt let slip that the iSlate would cost 499 Euros on a T-Mobile contract, or 899 Euros without which, if all things remain equal, would look at UK fanboys and girls needing Â£436 for one with a contract and an ouchy Â£786 without on March 1st.

That contract free price is a tad steep dontcha think? Either that or this tablet is going to truly amaze.

Even though Apple’s Q1 figures show a 50% increase CFO Peter Oppenheimer has admitted that the app store and iTunes aren’t exactly making the wad. He said â€œRegarding the App Store and the iTunes Store, we’re running those a bit over break-even, and that hasn’t changed, We’re very excited to be providing our developers with just a fabulous opportunity, and we think that’s helping us a lot with the iPhone and the iPod touch platforms.”

That’s not really the big news though. That came thanks to another slip, this time from Apple COO Tim Cook.

When he replied to questions regarding the tablet from shareholders with the line:

“I wouldn’t want to take away your joy and surprise on Wednesday when you see our latest creations.”

â€˜Creationsâ€™? – as in plural? Is this going to be the outing of iPhone 4.0 or something even specialererer?

Answers in the comments box please!