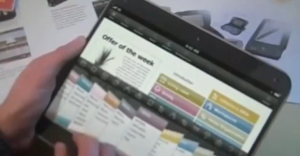 It does sound like this Apple Tablet or something similar is going to be coming pretty soon but I really doubt that this is it.

But, saying that, it’s still worth a look at the video.

The flick was posted by French site nowhereelse.fr and their Mac Tablet looks thin, light and is rockin a great touchscreen that helps getting around the interwebs – and the Ikea catalogue by the looks of things.

This mock-up has everything that you’d want and expect from the iProd: Accelerometer support? Check. iPhone-stlyee interface? Present. Flick gestures? Gottem.

The tablet niceness also has Coverflow as youâ€™d expect but I can’t see any evidence of multitouch which makes me think that this might not be the pukka device. What it does have instead is the rather funky ‘long press’ that brings pop-up menus.

If this is the kind of thing that the iTablet is going to bring then I’m guessing there’s going to be some very nervous eReader’s out there.