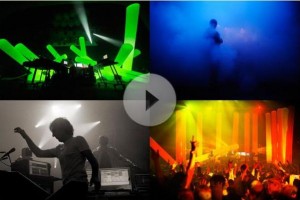 Apple has managed a couple of things with a little help from those electronic music makers – Underworld.

As well has showing off how good the video camera and 3.0 software update it is they may have ‘altered’ (or abused) the meaning of ‘live streaming’.

The Underworld gig in San Francisco is being claimed as the first to be streamed live from the device using the Akarmi HTTP video streaming protocol – nope, I’d never heard of it before either.

Unsurprisingly Apple has been questioned about it’s ‘live streaming’ claims as the concert was filmed over the weekend and wasn’t aired until the next day.

This means that it wasn’t streamed live, but it was a live performance broadcast as live? Cupertino – tsk, tsk.

The Akarmi tech is making quite a name for itself as it’s able to handle a large number of visitors to the video stream without falling over in a big mess.

It’s also smart enough to adjust the bit rate of the video depending on the speed and reliability of your connection so your playback should be smooth.

Sounds kinda groovy to me 🙂