Apple Store closes early ahead of iPhone and iPod announcements 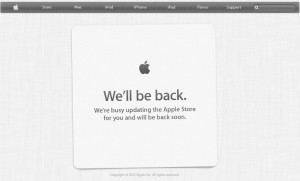 Today is the day that many an iPhone-fiend has been waiting for. The countdown has almost finished and it will soon be time for Apple take to the stage and announce this year’s big Apple products.

As well as the endless rumours, ‘leaks’ and teasers the customary closure of the Apple Store is as expected as snaking queues and the cultish mob excitement.

The store outage not only signifies that something new is on its way, it also gives the company time to restock its virtual shelves and update Apple.com website with all the new and shiny iProducts and their accessories.

Let’s face it – there’s going to be plenty to update.

Not only are we all expecting to see a new look iPhone 5 handset there will undoubtedly be a raft of new accessories to fit the new shaped phone and its tiny dock connector.

We’ve already seen the new earphones, but there will be more after-sales accessories to throw your hard-earned at.

There will also be the new Apple iOS software, iOS 6, which will see Apple take control of the Maps app. The new YouTube app landed yesterday – a huge improvement over the Apple-built app that has been with us since 2007.

Not to mention there’s Apple iPod ranges to update!

I reckon this goes some way to explaining why Apple have taken down its website a tad earlier than normal.

Gone is the familiar Apple Post-it note on the site. Instead a multilingual scrolling “We’ll be back” message greets you at the store.

I’ll keep you updated via Twitter and then will report on all the Apple goodies later this evening.