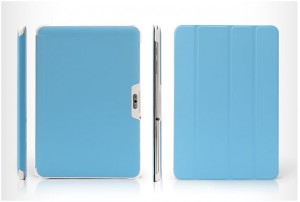 iPad 3, iPad HD or Jeff – whatever the new Apple tablet is going to be called the proud owners of the next gen slate will want to look after it. The Apple Smart Cover may be getting a refresh in order to better protect the new iPad.

The current Smart Cover does a reasonable job at protecting the screen on the iPad 2 and, let’s face it, you’ll want the spanky new Retina Display on the soon-to-announced tablet to be well guarded.

The thing is – who’s got the iPad’s back?

Well, according to iLounge’s source, Apple have realised that their latest child should not be passed around with its backside exposed to the elements. This has given to Cupertino clever-clogs in designing the Smart Case.

Word is that the iPad 3 (for sake of argument) Smart Case will feature the existing folding magnetised Smart Cover on the front, and a fiberglass and leather shell to shield the rear of the iPad 3.

Yeah, nothing new really in the world of third-party protection (the picture above is a Smart Case for a Galaxy Tab) but for Apple this is a new thing 🙂

Now, depending how things pan out, I wouldn’t look to buying a Smart Case for your iPad 2 if it does arrive.

If all reports are true then the iPad 3 is said to be a tad thicker that the iPad 2; but that’s not to say that Apple wont release an iPad 2 version of the Smart Case if sales are decent 😉