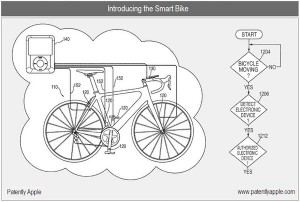 It’s getting close to that time of year when more iPod rumours, leaks and guesses abound.

There’s plenty of journalists already covering the new Covent Garden Apple Store – as nice and as large as it is; it’s still just another retail outlet.

I’m going to let the other sites deal with those until there’s something more interesting to report – before you say anything, I reckon the new iPhone 4.1 / 5 rumours have been confused with the release of the LTE- and CDMA-compatible iPhone 😉

Apple has applied for a patent for a concept that theyâ€™re calling Smart Bike and it seems to be a two-wheeled version of the Nike+ idea.

It all uses a variety of sensors, links, software, cleverness and an iPod or iPhone. This all will go to displaying information about the Smart Bike (speed, distance travelled, etc) as well as the rider (heart rate, calories burned, etc).

I’ve a feeling that all of this would be a tad expensive for your casual cyclist but I have no doubt that Apple’s marketing team would get even resolute couch potatoes gagging for a Smart Bike!

Slip over to Patently Apple for a more in depth look 🙂