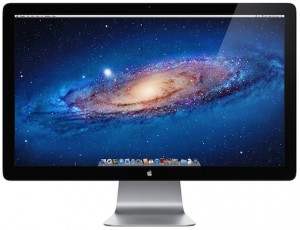 It looks like Apple will be tweaking their current line of monitors as new pictures land of the rather snazzy LED Cinema Display.

The swish monitor not only sits there showing the OS X Lion desktop but is flashing some daisy-chaining skills.

The part number originally thought to prove the expected MacBook Pro refresh has now been pinned down to being the new monitor after Apple prematurely posted the new images on its site depicting the display and identifying it in the URL as being assigned the “MC914” part number.

Apart from appearing with the Lion desktop rather than Snow Leopard the front looks identical to the current model. Around the back, however, you’ll discover a Thunderbolt port in place of the current mini DisplayPort connection.

Amongst the new images is one showing a MacBook Pro connected to two LED Cinema Displays daisy-chained via Thunderbolt. This feature would only be compatible with 15-inch and 17-inch MacBook Pros of the current generation which support Thunderbolt.

The new displays will join the new MacBook Airs and Mac Minis.