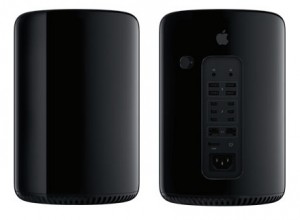 Straight from the ‘I didn’t see that coming’ files is the new Mac Pro which looks like no other computer I’ve ever seen – and that goes for the spec sheet too!

I was expecting to see some new Apple hardware at the WWDC but I didn’t, and couldn’t have, predicted that the all new Mac Pro would come in this shape.

The Mac Pro design is black and cylindrical. Unfortunately, as soon as Phil Schiller revealed it the “it looks like a bin” remarks started popping up on Twitter. But, then, I remember all the sniggering over the iPad’s name when it was revealed.

Love it or hate it – it’s certainly compact – an eighth the volume of the current Mac Pro and stands 9.9-inches tall and 6.6-inches wide

The 2013 Mac Pro has been totally redesigned with a new, cylindrical chassis and vastly upgraded internals that have been designed to last for “(another) 10 years.”

The change in shape is greatly thanks to a new thermal core, a triangular air duct that runs through the center of the hardware with one huge fan mounted at the top to keep everything super cool. 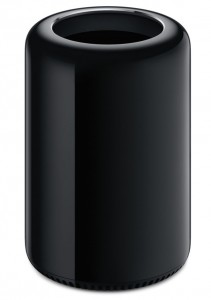 Following the trend of the MacBooks, the new power tower uses PCIe-based flash storage, and so pro users will be relying upon four USB 3.0 and six Lightning 2.0 ports. Each of these ports supports up to six daisy-chained devices, meaning that, yes, you can add up to 36 external items to each Mac Pro

Fortunately, for those of you who intend on placing the hardware beneath your desk, the expansion ports light up to help you find your connections in the dusty darkness. Other connections include HDMI-out 1.4, dual gigabit Ethernet jacks, WiFi 802.11ac, Bluetooth 4.0 and the usual pair of 3.5mm audio in and out ports.

This machine is also the first Mac that’ll ship with dual AMD FirePro GPUs as standard. These bad boys can support 4K displays.

Expect it not to be cheap.