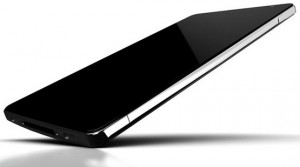 I, for one, have been waiting for Liquidmetal phones to make an appearance for a long while. Up til now, the nearest to such a device is the SIM ejector tool which comes with iPhones – but is this soon to change?

The metal alloy from Liquidmetal has been around for a while and has promised so much (but not melty T-1000 robots, just yet). The thing is, no one’s really been able to figure out how to put the difficult-to-manufacture material to good use – until now.

According to a new patent uncovered by Electronista, Apple seems to think it’s figured out the key. One day soon, you may very well find yourself tapping away on an iPhone made of this cool, beautiful alloy.

The biggest problem with the alloy is that, although it’s easier to make (no quick cooling required), churning out large sheets of the stuff in a controllable thickness is a little more tricky.

Liquidmetal is a member of a class of metal alloys formally known as bulk metallic glasses. The material shares some properties most closely associated with glass, like impact brittleness, and, instead of a fixed melting point, a gradual loss of integrity at higher temperature. It’s a mixture of more familiar metals: copper, titanium, aluminum and nickel.

Instead of simply mixing the alloy and letting it cool, amorphous alloys are cooled more quickly. This changes their atomic structures, in turn altering their basic properties. Ordinary metals typically have crystalline, ordered atomic structures, and therefore tend to deform when struck or flexed; amorphous alloys are made of chaotic, unordered atoms, which tend to spring back into shape, more like a liquid. Most metals have directional grains, like wood. Liquidmetal doesn’t.

It’s cool because it’s favoured as a stronger alternative to plastic and a more flexible alternative to metal. Unfortunately, because of its funkiness, Liquidmetal doesn’t fit into current methods of manufacturing – stretching and molding sheets of the stuff like ‘normal metal’ just snaps them in half.

Electronista states that Patent number 8,485,245 B1 is for a “Bulk amorphous alloy sheet forming process”  and was awarded on July 16. From the patent filing, Liquidmetal “can be valuable in the fabrication of electronic devices.” Specifically, the patent names iPhones, “portable web-browser (e.g. iPad),” computer monitors, and portable music players as likely targets for the material.

The filing also mentions that it could be used in a “watch or a clock,” suggesting that Apple may be thinking of using the material in a future “smartwatch” device it has been rumored to be working on.

It will certainly be interesting to see if this manages to move from patent purgatory in to the really, real world.