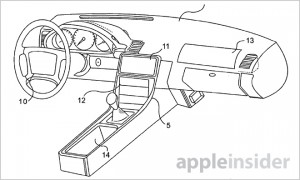 Apple moves closer to taking control of your car today as it has been granted a patent today for an in-car, touchscreen telematics system that would provide drivers with tactile feedback to help them keep their eyes on the road.

This latest news takes iOS 7?s new car-specific features, which were recently uncovered in the software’s beta, to their logical conclusion and hand the entire design of your car’s dash info and entertainment console features over to the Cupertino tech giant.

The system would still use the familiar controls currently found in your motor such as knobs, sliders, and touchscreen controls but plans to have them be user programmable.

The patent talks about customisability through apps and information, such as from the Stocks app, being displayed through the console.

The patent filing itself is an older one, but Apple is just now starting to really make its intentions known regarding how it will begin to expand in this new market.

iOS In The Car looks to use Wi-Fi and AirPlay to essentially take over existing infrastructure within an vehicle from an iPhone. A reconfigured iOS home screen, with the relevant features highlighted, shows up on the in-dash touchscreen, bypassing any kind of internal infotainment system altogether.

Where most people have got Apple pinned down to appearing stronger in the living room and on wrists as their next move, perhaps the car makes more sense.

Apple has been working with car manufacturers to integrate Siri already, and iOS In The Car will extend that relationship even further with its partners.

What do you think of this move by Apple? It’s certainly leaps from using your iPhone as your in-car entertainment head unit.