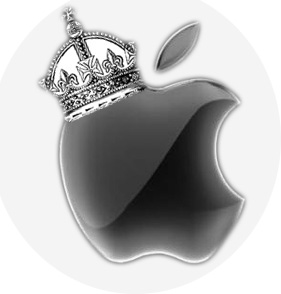 There shall be much cheering in Cupertino as Apple steals the crown from Google and becomes the world’s most valuable brand today in the annual BrandZ study by market watcher Milward Brown.

Apple already seems to be everywhere – try taking a walk around town or hop on to public transport and count how many iPods, iPads and iPhones of various generations you can see.

This combined with the huge boost courtesy of iPhone 4 and iPad 2 has sent the Cal-based company flying as its brand value increased by a crazy 84% per cent to hit $153 billion (Â£93 billion). So it seems that neither antenna-gate or theÂ surreptitiousÂ snooping did Apple much damage then.

That leap means that Apple are now worth Â£25 billion more than itâ€™s nearest rival, Google, who saw its value fall by 2% to $111 billion (Â£68 billion). Google must be more than a little miffed as its Android OS platform is definitely getting more popular every month and now that Honeycomb tablets are hitting the stores they will be plotting some serious revenge I shouldn’t doubt – they even get a welcome hand up thanks to Amazon and their tablet plans 😉

The list does appear to be tech and telecom lead with IBM just behing Google at number three, Microsoft at number five, AT&T at number seven and China Mobile at number nine.

Vodafone was again named the most valuable brand in the UK after ranking 12th on the global list, with a value of Â£26.2 billion.

It may shock and stun you to discover that Facebook has only just made its debut in the top 100 this year. The social network giant appears in at 35 with the highest increase in brand value at a whopping 246%!. Millward Brown’s study values everyone’s blue-bannered wast of time brand at $19.1 billion (Â£11.6 billion).

Here’s the top 10 of tech just for comparison: