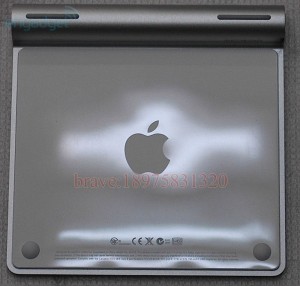 If you’ve got used to swiping, pinch-zooming and such but have to resort to general mouse-use when back at your computer things may be about to change – and possibly sooner than you think!

It appears that the FCC has just approved a new bluetooth device made by Apple.

Everything matches up and it looks like Apple’s got a new trackpad device aimed at desktop computers. Â The shortlist of names seems to be Magic Trackpad, Magic Slate, or Magic Pad based on trademark filings and in order to keep it in line with the Magic Mouse naming system.

By the looks of things this new device is pretty much a MacBook trackpad without the MacBook bit.

It certainly follows the design of Appleâ€™s new style keyboards but with a totally strokable, prodable and clickable surface 🙂

Before you all go MEH!

It could prove game-changing – just imagine how cool it is using the fairly limited but very useful multi-touch that the Magic Mouse has brought. Now add pinch-to-zoom and two-finger rotation.

Multi-touch has to be the way forward – what do you reckon?