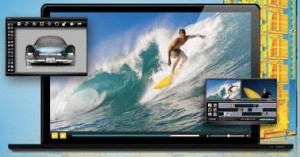 If you’re in the market for a MacBook Pro I’d suggest hanging on a a few days.

You see there’s been rumours of a refresh coming soon and shipments may have already been landing in store rooms around the country already.

The new MacBook Pros may contain Intel’s Light Peak, which is designed to link puters to devices such as displays and external storage.Â  This wired connectivity boasts speeds of 10Gbps in both directions, leaving even USB 3.0 lagging behind. Intel has also added fuel to the fire thanks to their advert for the second-generation Core processors which seems to show a new slimline MacBook Pro (cropped version above).

It’s looking likely that there’s something afoot in the MacBook camp as people in the states attempting to buy a MacBook Pro on Apple’s US online store are being faced with a three to five business day delivery time – instead of the usual 24 hours.

When writing this the UK store is still showing 24 hours for delivery of a shiny MacBook Pro but this could change tonight.

The best indication is that there has apparently been numerous European resellers given a heads-up to expect sealed-pallet shipments of a new product from today. They have been warned that these special deliveries must not be tampered with ahead of an official announcement. Word is that these Apple resellars ran out of existing MacBook Pro stock earlier this month and have been waiting for new supplies.

Have you anything else to add? It has been almost a year since there’s been a new MBPro – Let me know 🙂