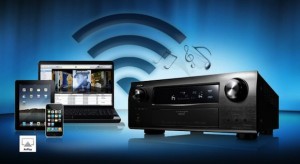 Apple will be going ahead with the latest Bluetooth 4.0 standard to increase the performance of their AirPlay wireless streaming – it also opens the door for other exciting hook ups.

Apple announced that they will be using the new wireless audio and data transfer system at a conference in Shenzhen, China. The members of Apple’s MFi (Made for i[enter Apple device name here]) Program were told that Apple will be providing iPhone, iPad, and iPod accessory developers a way to wirelessly transmit audio and other data to and from Apple’s mobile devices using the new Bluetooth 4.0 standard.

The bonuses of Bluetooth 4.0 includes its low-power usage and, perhaps more importantly, low-latency capabilities. This not only makes it ideal for use with battery powered AirPlay speakers but also with video streaming use with Apple TV. With lower latency wireless connectivity it could open the doors to using your iPhone as a gaming controller and other such interactiveness.

Apparently, while the iOS device market continues to grow at a decent rate the number of AirPlay-compatible devices is not following that trend. Apple is no doubt hoping that its new Bluetooth 4.0-friendly chip being embedded in to iOS-device compatible products will make AirPlay more attractive.

Apple began including support for Bluetooth 4.0 in recent MacBook Air and Mac mini updates. The iPhone 4S, released in October, also supports Bluetooth 4.0 – this all points to Apple seeing this as being the future (for now).